The first official Mount Eerie studio album in Phil's eyes was 'No Flashlight' Songs of the Fulfilled Night, released in August 2005. The original pressing featured an extremely large fold-out sleeve with extensive footnotes and explanations. An usually overlooked album (surprisingly so too, this was the first breath of life that the mount eerie project took right after the moniker of 'the microphones' was abandoned), 'no flashlight' is a surprisingly melancholic and somber album. It's gloomy and upbeat production only serves as a contrast. It's heavily bass'd up songs are also in an inverse relationship with the wispy guitar. No Flashlight, an album by Mount Eerie on Spotify. Our partners use cookies to personalize your experience, to show you ads based on your interests, and for measurement and analytics purposes. By using our website and our services, you agree to our use of cookies as described.

'No Flashlight': Songs of the Fulfilled Night is the first studio album released by the band Mount Eerie. It was released on the 9th May 2005 and features appearances by Geneviève Castrée and Jason Wall.

The album was recorded in Nowhere, Anacortes from October 19th, 2004 to January 30th, 2005, the mixing was done at The Unknown studio in Anacortes, it was mastered by T. Stollenwerk.[2]

Physical versions of the album come with a very large album fold-out with one side showing a large illustration, and the other filled with extensive footnotes and explanations of the songs, with references, clippings, and photos.

The Drums from 'No Flashlight' by Mt. Eerie[edit] 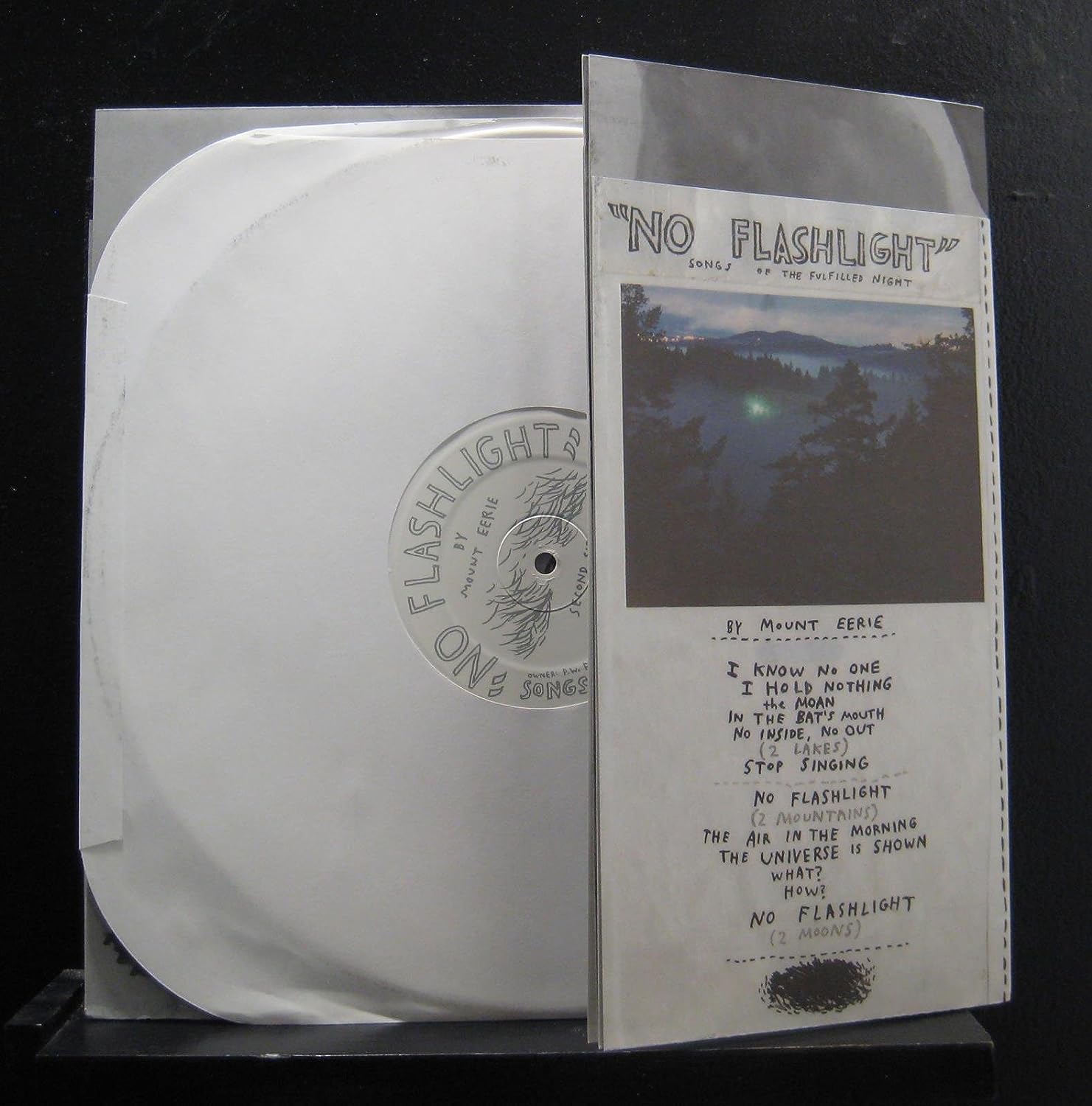 The drum tracks from this album were later released separately as The Drums from 'No Flashlight' by Mt. Eerie, with the band claiming: 'We felt the drums on 'No Flashlight' sounded good enough to listen to by themselves.'[4]

'No Flashlight': Songs of the Fulfilled Night received generally positive reviews upon release. Metacritic, which assigns a normalized rating out of 100 to reviews from music critics, the album has received an average score of 72 based on 5 critics, indicating 'generally favourable reviews'.[5] In a positive review Dom Sinacola of CokeMachineGlow wrote that 'No Flashlight doesn’t sound much like a lullaby worth revisiting each night. Amazingly, Mount Eerie still crafts a series of passages that breathes, and walks, and enjoys a generous restraint.'[6] Zac Pennington and Adam Gnade of Portland Mercury wrote that 'After releasing three consecutive records of masterfully progressive conceptual vision, Elverum's latest (as its title suggests) seems to be more about a search for something than a destination', 'And though at times frustrating, it's the questions that keep me consistently coming back to No Flashlight. So Phil: what does Mount Eerie mean, anyway?'[8]

In a review by Tiny Mix Tapes wrote that 'Phil is obviously trying to communicate a particular message with little abstraction. He's taking this opportunity to share with us something special to him, and he's doing so in the most honest way he can.'[10] Elizabeth Newton of The Quietus praised the album writing that 'Fluctuations in Elverum's persona, self-consciously sullen and wrung from second thoughts, ultimately add up to a stable whole because his tone remains so thoroughly distinctive' and that 'Now more than ever, this music is laced with its maker's insistent worldview at every turn, and it's better for it.' [11]

A mixed review by Stylus wrote that 'because Elvrum’s philosophy is a rather muddled one (even with a surfeit explanation bordering on the absurd), it tends to take away from the album at key moments. Musical highlights like the beautifully hummed “How?” are weighed down by Elvrum’s insistence on calling the visible world “the romance” or the unfortunate lyric “Because the pupil of my eye is a hole / There’s no Inside and there’s no Out / The world is in me and I am in the world” from the shimmering “No Inside, No Out.”'[9]

in a negative review, Sam Ubl of Pitchfork said that 'Demanding listener input-- as Elverum does here by not-so-subtly inviting us to ponder him-- isn't a bad thing. But courting ears with such esoteric hooey is disingenuous and annoying' and that 'he now makes boring music that is premised on his persona and the explanation thereof'[7]

Eric Hill of Exclaim! Included the album in a ranking of Elverum's 'essential' albums.[12]

All tracks are written by Phil Elverum.

Phil Elverum, the folk-noise musician and recording engineer that is Mount Eerie, is all too aware of how critics view him: he is a loner genius surrounded by natural beauty, tinkering with magnetic tape in a moss-covered hideout. Resistant, as we all are, to misunderstandings, he goes to great lengths to set the record straight. No Flashlight, his first album as Mount Eerie, opens with the track 'I Know No One', on which the narrator half speaks, half sings: 'Knowing no one will understand these words, I have tried to repeatedly explain in complicated songs'. Underneath, an urgent, sustained pitch rises to fill the mix, insistent. But the meaning latent in these lines is cryptic, peculiar: is the joke on us, or him? Elverum's songs are simple, by some measures, yet we never can seem to hear them right. Now we have another chance.

No Flashlight, first released in 2005 and subsequently out of print in intervening years, has just been 're-mixed, clarified, re-mastered, and re-pressed' on Elverum's label P.W. Elverum & Sun, made newly accessible to a wider audience. But is accessibility synonymous with being understood? For those unfamiliar with Elverum's songs, his narrator is a typical troubador, singing about singing, crafting reflexive emotional snapshots of contentment despite loss. Even on the song 'Stop Singing,' he sings. The myriad tender hypocrisies of his songs never aggravate, though, tempered as they are by empathy; the narrator, glum but loving, complains that no one understands him but commiserates in the challenge of reading others: 'I will sleep through every single dawn / those I see I will not understand / though I try.'

Reflecting on his original release of No Flashlight, Elverum writes, with a touch of humour: 'The packaging and rhetoric was oversized.' Ever critical of pompous spectacle and inflated ambitions, Elverum's modest persona is perhaps its own type of display, a performance of humility that would read as precious were his lyrical statements not shrouded in dense noise, feedback, and other mysteries, the products of sheer sonic inventiveness incomparable to any other sound artist working today. Solid as steel and then sparse like a meadow, these recordings routinely explode, implode, and crumble away. We hear paper rustling in full stereo while sustained textures swell and stagnate. Elverum's croon enters, citing lyrics that linger like ghosts.

Self-effacing in the face of continual reconstruction of the self, Elverum never stops confounding us. 'Soup is a format', the musician tweeted in 2013, less an intervention in old debates about the digital-analog divide than an outright refusal, a provocation couched in characteristic understatement, managing to be both mundane and absurd. Elverum's own musical craft is perplexing. It involves elaborate analog recording processes even as he has embraced digital intervention in both recording and distribution methods. Perpetually threatening disappearance or evaporation, Elverum's ethos seems to resist the permanence of archives and institutions, yet he is known for his careful crafting of liner notes, packaging, and other material artefacts. Regarding this reissue of No Flashlight, he meticulously spells out physical specifications of the album's packaging - 'white vinyl, old-style gatefold jackets with spot UV varnish” - but meanwhile claims that 'the songs stand on their own.'

Contradiction is essential to Elverum's aesthetic. As Brian Howe observed of the 2008 reissue of Elverum's most famous project, The Glow Pt. 2, Elverum's 'speciality was reconciling extreme orders of magnitude, casting mountains and planets and stars as items hanging from a baby's mobile.' This pairing of 'intimacy and opulence' appears everywhere on No Flashlight: the song 'I Hold Nothing' begins by blowing its container to smithereens, but the recklessness quickly recedes into a pleasant stroll. On 'The Moan,' metal riffs played as loudly as possible segue into 'In the Bat's Mouth,' a sweet ode to a cave beyond the foothills.

Fluctuations in Elverum's persona, self-consciously sullen and wrung from second thoughts, ultimately add up to a stable whole because his tone remains so thoroughly distinctive, here and throughout his catalog. From the perceptible remixing of the tracks on No Flashlight through to the elaborately refigured liner notes, it is unclear whether Elverum aspires to transparency or would prefer to be misheard, though he must know that we will regard him lovingly either way. In any case, he is wrong when he says his songs stand on their own. Now more than ever, this music is laced with its maker's insistent worldview at every turn, and it's better for it.